Lying on the living room couch with my eyes closed, the once-forgotten sound of passing trucks teases traces of distant memories to the front of my mind. Thoughts of Saturday morning toast with fried eggs and honeycomb cereal start flowing. Has it been fifteen years since I last stayed the night here? Somehow, the sounds and smells make it feel like childhood was yesterday. My sister and I would pull out the box of toys and somehow, the noisemakers we loved so dearly would disappear as we played “I Spy” in this very room.

Differences stand out the most

While some things are the same, the differences stand out to me the most. There is now one recliner where there had been two. One bedroom has been unoccupied for six years. The piano looks as though it hasn’t made music in at least that long. The kitchen has new carpet, but the tablecloth with matching placemats is still around, tucked away in the hall’s linen closet.

Walking back into the hall, I step into the room I occasionally slept in as a child. The scent reminds me of the nights my older sister and I would share the room. We’d argue over who got to sleep where on the bunk bed and were always wanting to get up long before we were supposed to. Deciding the clock was wrong, we’d sneak out to the kitchen to look at the clock in the corner over the cabinets. We must have been right once that our time was wrong, and we never trusted the clock again, causing us to get fussed at “go back to bed” by a voice I hear only in echoes as I recall those days.

Despite everything that has changed

The echoes grow louder as I carefully tread down the stairs. Despite everything that has changed, the calendar in his study stays the same, like a plaque commemorating the month and year the change occurred. The pile of Bibles with notes scrawled within them has a dust layer that grows thicker as time passes. A timepiece lies there, reminding us we ran out of time. It feels irreverent to move them; they’re a memorial to every-day holiness.

Sometimes, you learn more about a person after they pass than you did before. The minuscule becomes essential as you realize people and relationships are more complex than you thought. Those wrinkled hands I knew as a child were once strong as they farmed the ground. They were steady as they gripped the steering wheel while transporting coal, gentle yet firm as they raised children and grandchildren, and delicate as they turned the pages of a Bible.

I looked at him once and exclaimed, “You’re old!” not recognizing then that the lines on his face carried not only his age but also his wisdom. I prayed one day I’d find someone just like him. Someone with an ornery glimmer in his eye who could rework a tractor so the front was the back and leave a legacy of devotion to his Savior that makes others want that, too.

Changes can be the catapult

Some change is uncomfortable; it is bittersweet. It can leave you wishing you could go back in time and play the piano once more for individual ears to hear and enjoy. Turn another somersault across the living room floor while you can and see the joy on a face you now see only in pictures and memories.

“The aches of our most heartbreaking changes can be the catapult to our greatest epiphanies and relationships.”

Physical things will pass away, but may we always remember that truth will not. “Hope = divine certainty” – words written in his Bible and spoken at his funeral. I learned I couldn’t know how many people he influenced and changed during his life. He changed my life. I mark the words in my Bible and build my outlook on them. The aches of our most heartbreaking changes can be the catapult to our greatest epiphanies and relationships. The best is yet to come.

Katherine Nadene is an old soul contained in a small body. She started writing after she realized her calling to encourage others who are also chronically ill and found healing herself through the words she writes. Her heart lives in the mountains, but her body lives in a small town in Pennsylvania with her husband, her twelve-year-old puppy, and never enough books. A worship leader and youth worker at one church and the administrative assistant at another, she enjoys writing, reading, and knitting in her spare time. www.purelyhoping.com  IG @purely_hoping

“Heartbreaking changes can be the catapult” is just one from iola the change issue. Get your copy here. 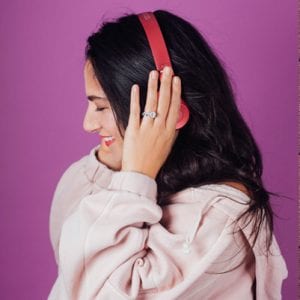